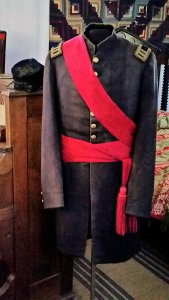 Heidelberg Guard Civil War Uniform Coat
One of the historical treasures of our Brendle Museum has just returned from Philadelphia where it was being cleaned and ‘conserved’ at the Philadelphia Textile & Object Conservation.

It is the Civil War uniform frock coat, forage cap and decorative sash once worn by Heidelberg Township resident Captain William B. Iba, who commanded Company I of the 173rd Pennsylvania Infantry, one of many units formed of drafted militia in late 1862.

Company I was sometimes known as the “Heidelberg Guards” since it was formed from mostly Heidelberg Township, Lebanon County men. It was mustered at Camp Simmons (part of Camp Curtain) in Harrisburg in Nov. of 1862 for a 9 month tour of duty, which mostly consisted of guarding base camps and railroads from Norfolk, Virginia to Washington, DC and, after the Battle of Gettysburg, to Frederick, Maryland. Capt. Iba and his men were discharged from duty on Aug. 18th, 1863.
The Iba family saved not only this uniform, but also Capt. Iba’s sword and sheath-belt and several documents which shed light on Captain Iba’s duties and experiences. He wrote to his father after 4 months on active duty, saying “soldiering agreed with him” and he and his company “were engaged in the battle of Broad Creek last week and came through rather easy without loosing a men or firing a gun.”

The Brendle Museum and Historic Schaefferstown Inc. are greatly indebted to the Lodwarrick Questers, and their parent group for funding the conservation of Captain Iba’s uniform. The Museum is in the process of building a special display case and preparing an exhibit centered around the uniform and Capt. Iba’s role in the Civil War and the Heidelberg Township community.

After his retirement in 1980, John R. Dale, formerly of Willow Grove, began carving historical dioramas depicting early Pennsylvania-German life, which he termed “wood stories.” He created more than 140 of them before his passing in 2007. HSI is lucky enough to own 34 of them.