Historic Schaefferstown, Inc.’s Mission is the collection, preservation, study, and dissemination of the history and folk culture of the Pennsylvania Germans in South Central Pennsylvania, with particular focus on Schaefferstown, Pennsylvania. The organization provides information through educational programs for adults and children, tours of its buildings and collections, festivals and special events, and publications of research and promotional materials. 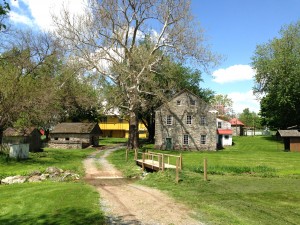 Founded in 1966, Historic Schaefferstown, Inc. is a non-profit educational organization dedicated to the culture and unique history of Schaefferstown and greater southeastern Lebanon County, Pennsylvania.

The Pennsylvania German and Swiss cultures which flourished here during the last few centuries are authentically presented among several historic sites – the Alexander Schaeffer House and Farm, the Thomas R. Brendle Museum, and the Gemberling-Rex House.

Throughout the year, our sites host cultural events designed to educate in experiential, memorable ways. Our directors and volunteers work to restore, preserve and maintain our historic properties and museum collections.

Schaefferstown was founded in June 1758 by German immigrant Alexander Schaeffer. He called his new village Heidelberg, but it was not long before people began referring to it simply as Schaeffer’s Town.

The town Schaeffer planned was very much like those he had known in Europe. Building lots for homes and businesses were arranged around a large central square, at the intersection of two main roads, one running east to west, from Harris’s Ferry (Harrisburg) and Hummelstown to Ephrata via the Cornwall Iron Furnace, and the other north and south, connecting Conrad Weiser’s settlement at Tulpehocken with Lancaster, passing by Elizabeth Furnace.

Because of its prominent location near larger settlements and iron sites there was much traffic through the town, and stores and taverns sprang up to cater to travelers and residents alike. In 1761, an advertiser in the Pennsylvania Gazette announced that a post rider would take mail each Monday between Lancaster and Lebanon, with the tavern kept by Paul Gemberling on the square in “Heidelberg Town” as one of the regular stops. The tavern is now known as the Gemberling-Rex House. By the end of the 18th century there was also an open-sided wooden market house on the north side of the square.

To provide water for the town, Schaeffer installed underground wooden pipes connecting a spring at the south end of Market Street to the square. The flow from the spring was so strong that the water actually flowed uphill to fill two troughs (or fountains). At the time, both were located on the town square. 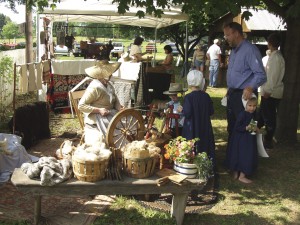 In 1763, Schaeffer deeded the reservoir property (now known as Fountain Park) and the water system itself to residents of Market Street. Homeowners on that street today are automatically members of the Schaefferstown Water Company, whose responsibility it is to maintain the park, and the two “fountains.” The trough on the square was replaced in 1910 with a granite fountain, donated by A. Matilda Zimmerman in memory of Mary Rex Zimmerman, her mother and great grand-daughter of Alexander Schaeffer.

After laying out the town, Schaeffer began immediately to sell lots, but he reserved the right to collect an annual ground rent of a few shillings from the buyers. He kept one of the best lots on the square for himself, and there he built a large limestone building where he ran a general store and a tavern. This building, still operating as a tavern, was once called the King George. After the American Revolution it was given its present name, Franklin House.

Schaefferstown’s residents built homes of log, half-timbering, or limestone topped with red clay tile or wood shingle roofs. By the turn of the 19th century, according to Scott’s Geographical Dictionary of 1805, it was “a handsome town” with about 100 dwelling houses, and two churches – a German Lutheran and a Calvinist (German Reformed) Church. The fine limestone Lutheran church, built in 1765, was particularly noteworthy, according to another observer, since almost all other churches in the region were built of wood.

As originally planned, town lots fronted on Market Street and other smaller side streets and ran longwise along Main Street (now named Heidelberg Avenue). This proved inconvenient, and over time landowners changed the orientation of the lots to face Main Street.

The official registration and financial information of Historic Schaefferstown, Inc. may be obtained from the PA Department of State by calling toll free, within Pennsylvania, 1-800-732-0999. Registration does not imply endorsement.

Funded, in part, by a grant from PHMC.