Set on the scenic 85-acre farm south of the village, the site hosts living history cultural events and educational tours. The mid-18th-century Schaeffer House represents a rare survival of the European tradition of combining domestic and manufacturing activities in the same building. In this case, whiskey distilling was done on premises in the early days. The house has been on the National Register of Historic Places since 1972. The U. S. Secretary of the Interior designated it a National Historic Landmark in July 2011. A ceremony unveiling the National Historic Landmark plaque was held in June 2012. 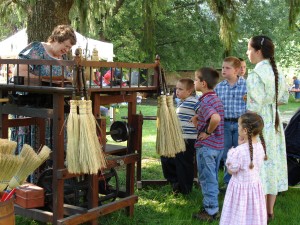 While National Register listing indicates state-wide importance, Landmark status means that the site is of national significance, possessing “exceptional value or quality in illustrating or interpreting the heritage of the United States.” There are only 167 National Historic Landmarks in Pennsylvania and 2,500 in the United States. Prior to 2013, the farm had included 90 acres in total, however the village’s highway bypass construction shaved 5 acres from the western edge of the property.

The farm hosts HSI’s major seasonal events, including the Traditional Cherry Fair and Early American Craft Show, and the Fall Harvest Fair. The non-museum facilities on the farm are available for special events, including family reunions, vintage car shows, and more. Contact the HSI office for details. 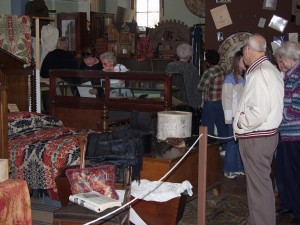 Located on the eastern side of the village along the Route 419 Scenic Byway, the Brendle Museum is across the street from HSI’s Gemberling-Rex House Museum. The Brendle Museum is named for Thomas R. Brendle who was a local resident and leader in the preservation of Pennsylvania German folklore at the time. The museum displays a wide variety of cultural artifacts. The lower level hosts events including lectures, classes, and individual and group artisan shows. 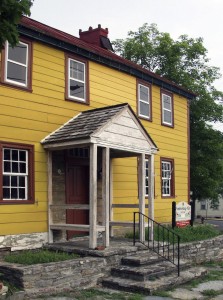 Across the street from the Brendle Museum along the Route 419 Scenic Byway, the bright gold painted Gemberling-Rex House was once a vibrant 18th century tavern serving thirsty villagers and travelers. Original features include a bar cage, a Franklin fireplace, and unique kitchen wall stenciling. The first floor has been restored beautifully, however the second floor is not and is unavailable for tours. The museum hosts a special Colonial Tavern Lunch each December, complete with period-dress servers, cider, traditional fare, and all the charm (or lack there of!) that early tavern staff could offer their guests. A memorable event.

Dec
9
Fri
4:00 pm Christkindlmarkt
Christkindlmarkt
Dec 9 @ 4:00 pm – Dec 10 @ 3:00 pm
Enjoy this free-admission event where you’ll enjoy finding handmade period gifts made by 20+ skilled artisans working in our area. We have once again partnered with St. Paul’s UCC to host this event. You’ll find ample shopping space, plus plenty of off-street parking. The venue’s address is 1304 Heidelberg Ave, Schaefferstown PA 17088. Credit cards accepted. (Depending on state health guidelines…
Dec
10
Sat
10:00 am Tavern Lunch
Tavern Lunch
Dec 10 @ 10:00 am – 2:00 pm
The annual Tavern Lunch is held inside the Gemberling-Rex House at 106 N. Market St. There are 5 full-service sittings from late morning to mid-afternoon. Meals are $16.00 per person and seats fill up fast, so reserve yours early. (Reminder: Our Christkindlmarkt is free and held across the street in the Brendle Museum’s lower Level, where you’ll enjoy finding handmade period gifts made…
View Calendar